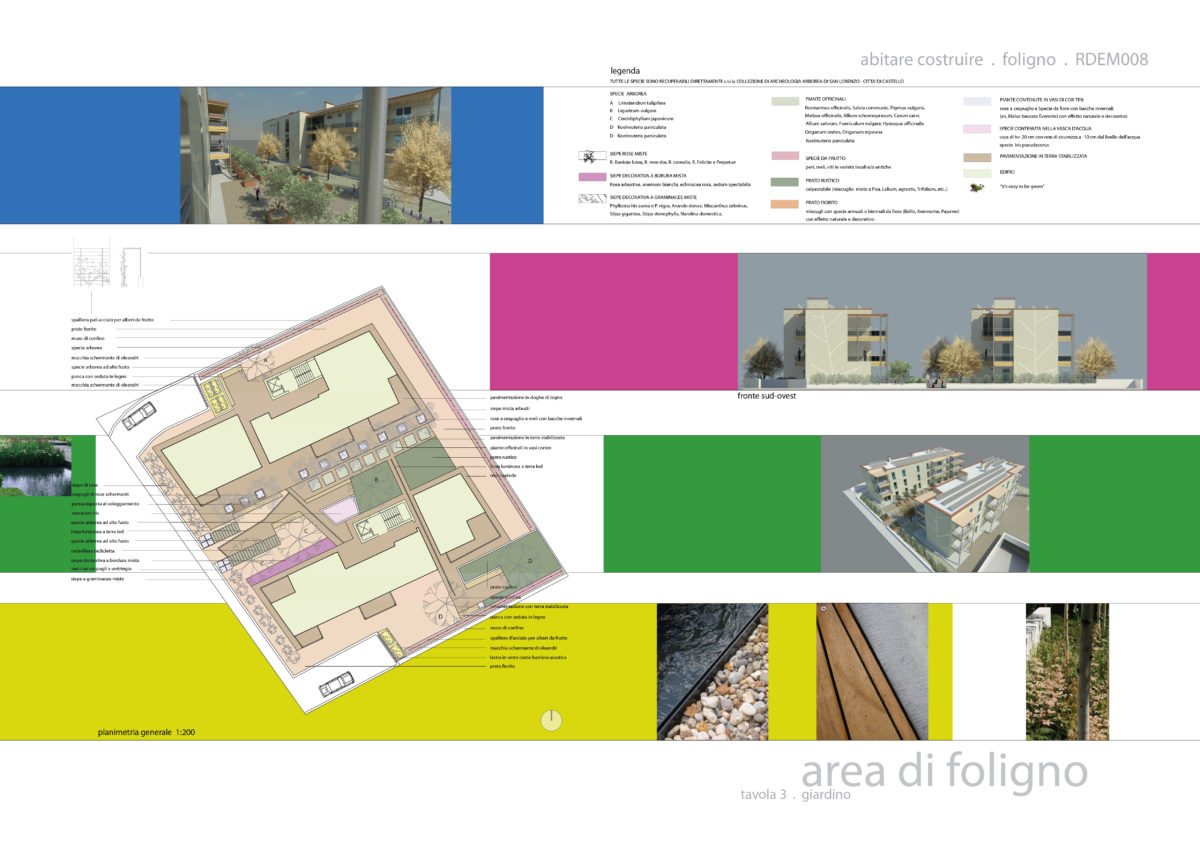 The building sector, which is the subject of the competition announcement, consists of two lots (n.22 and 23) intended for public residential buildings. Two multi-family buildings are planned for a total of at least 18 apartments.

The spirit of our proposal was to carry out an intervention that sought to combine the value of tradition and context with technological innovation, of method, of thought that are at the center of our way of designing and building.

The image of ourselves that wants to give our intervention to the first approach is that of a “familiar”, “welcoming” building, linked in a certain way to tradition, which however has the courage to look ahead and to know how to welcome innovation as an opportunity.

We have reworked the facades plastered with the frames designed around the windows, the exposed wood externally in the soffits of the floors, a rather simple and “clean” language. However, we have introduced more modern elements in an attempt to renew the tradition, justified from the functional point of view for the greater living comfort that they allow to reach. This explains the use of glass in the parapets, an expedient that also serves to give more natural light to the rooms, and external blinds with adjustable and retractable slats (raffstore) that are used for shading and therefore to favor passive cooling of the housing in the summer season.

For us, the external arrangement is an integral part of the building project.

The green system is designed in close relationship with the two new buildings. We have tried to create a main space that can facilitate parking and socialization, with sessions and activities arranged taking into account the relationship with the sun and with the context. An attempt has been made to avoid so-called out-of-the-way spaces with the construction of transversal passages on the ground floor of the buildings to connect the marginal parts and integrate them in the system of routes and stops.

Local essences of easy maintenance with deciduous leaves have been chosen that in winter can pass the sun’s rays for the benefit of those living in the back rooms.

It was also thought to create a small geometric vegetable garden, a series of parallelepiped containers where it is possible to cultivate local odors and essences.

In our opinion, this is an element that favors the participation of the inhabitants in the management and care of the greenery and is able to favor that system of relationships that are also the basis of good urban quality.

As regards the choice of the two building bodies, the typology in line with an open distribution balcony to the 3 flats per floor allows to realize an acceptable transversal ventilation also for the central housing, more disadvantaged from this point of view compared to the two side ones.

Much attention has been paid to all aspects of living comfort and passive heating and cooling systems.

All the living areas have been provided in the most favorable side for the sun and lighting, placing the stairwell, the balconies, the corridors, the toilets, in some cases the sleeping area on the opposite side. Furthermore, in order to favor the entry of natural light, the living rooms were mainly arranged with the long side parallel to the external facade, thus limiting the depth of the rooms, maximizing the visual well-being and finally reducing the use and consumption of artificial light.

Another design criterion was the control of summer and winter sunshine. First of all we tried to make sure that the building to the south did not bring its own shadow to the building to the north, furthermore we studied the orientation and the dimensions of the windowed surfaces, the positioning of the projecting balconies, the use of an adjustable external shielding system in order to have a daylight control depending on the season. The components of the casing have been studied such as the external vertical walls and the roof slab so as to have an appropriate value of thermal insulation as well as of phase shift and attenuation of the heat wave in the hot season.

Particular attention was also paid to the passive acoustic requirements of the buildings. This includes the choice of the location of the elevator shaft, of the cavities, the construction of screeds separated from the structure, the creation of stratigraphy of the components of the envelope appropriately studied according to the principle of the “mass-spring-mass” and the shielding ramps for cars with appropriate glazing systems. 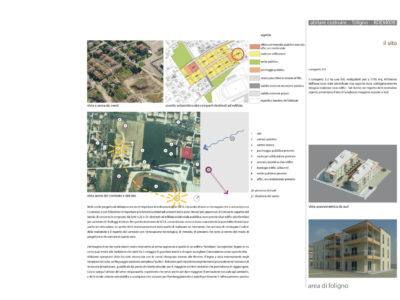 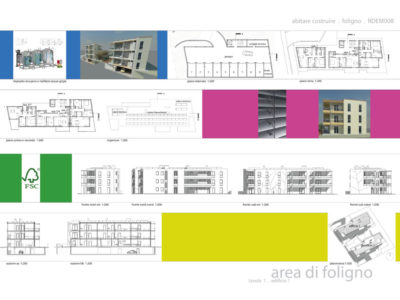 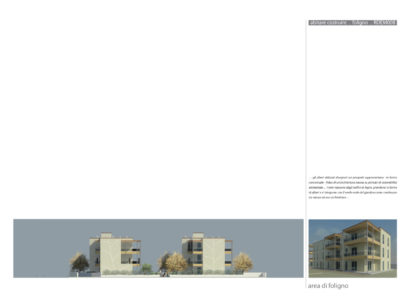 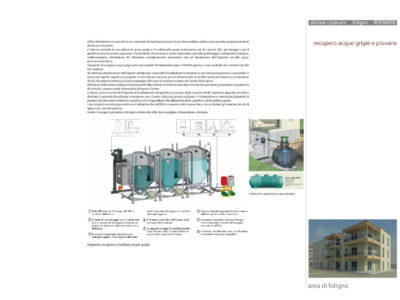 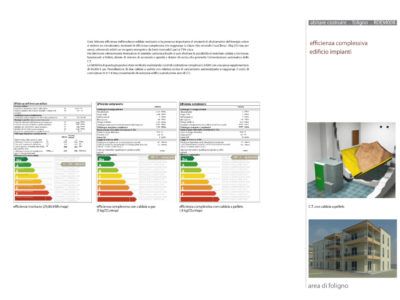 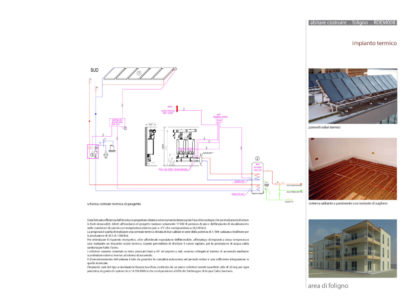 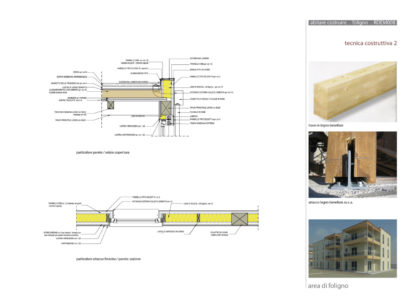 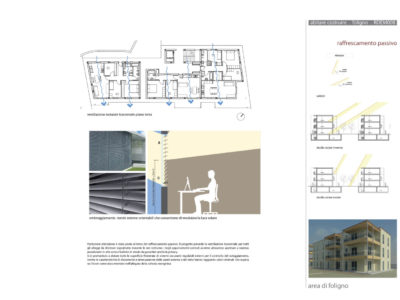 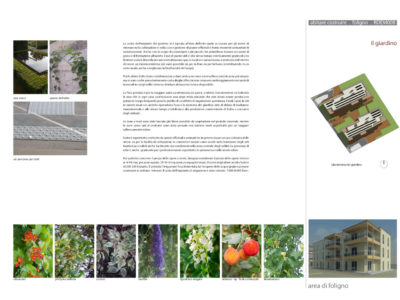 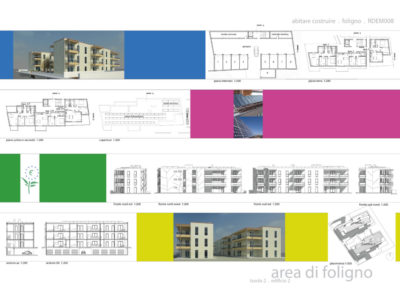